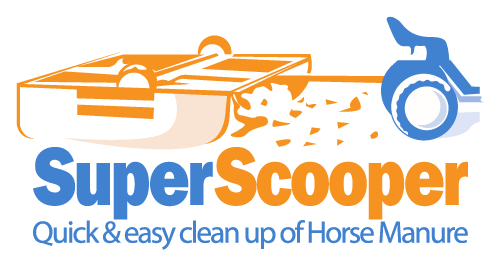 A great deal of engineering went into this design/construction. Certain areas are heavily welded and reinforced. The Super Scooper was designed for a horse owner on 5-10 acres to manage manure; it works best on flat surfaces, hills, river banks, and on short grass (up to 11 inches). Once used regularly you can start managing your pastures and eliminate parasites and weeds. Healthier horses also save you money on health care. Simply the best value + fastest manure collection system on the market!

Having the pleasure of owning horses comes with the task of horse manure management. Horse manure management greatly impacts the health and safety of our animals. Within these piles, parasites and disease can incubate. Spreading fresh manure is also a risky proposition as it can lead to illness, reduced plant growth, and increase weed population. The Super Scooper (horse manure collection) is the start of a system that can provide better habitat for your horses and generate a good fertilizer to boot.

“We were instantly intrigued by the Super Scooper product, the simplicity of the design, the affordability, and the ease with which we could clean our pastures. There’s very little that can go wrong and it is much more cost effective than other options on the market, without the hard work of a manure fork. The Super Scooper unit can easily be pulled by a quad, garden tractor, or even a golf cart… plus it’s so easy the kids actually want to help clean pastures now.”

The Super Scooper saves horse owners and businesses hours of hard work, eliminating the need to bend over performing back breaking work a shovel and wheelbarrow. This innovative design also acts as a yard trailer (converts in less than 20 seconds), designed to accommodate two small hay bales; the Super Scoopers dual use makes it an essential piece of horse equipment for your property.

THE BENEFITS OF COMPOSTING

THE SUPER SCOOPER CAN HELP!

A well-managed compost pile will reach temperatures high enough to kill fly eggs and larvae in manure. By reducing the amount of uncomposted manure you have, you’ll also reduce breeding grounds for flies.

The high temperatures achieved through composting also kill worms and pathogens (organisms such as bacteria, viruses, fungi, and protozoa that are capable of producing an infection or disease). This is especially important if you are spreading your manure in the same fields your horses graze in or on vegetable gardens.

A well-managed compost pile will be free of the odors often associated with an uncomposted manure pile.

CUT YOUR PILE IN HALF

Composting reduces bulk and has 40 to 60 percent less volume and weight than uncomposted manure. That means you can reduce the amount of your manure pile by about 50 percent by composting!

The high temperatures achieved through composting will kill most weed seeds.

Compost is much more marketable than uncomposted manure and is often used by topsoil companies, landscapers, nurseries, and organic farmers. You may be able to sell your compost and actually make money out of that mountain of manure!

EVEN OUT GRAZING PATTERNS

Horses grazing in pastures spread with composted manure (instead of fresh manure) are more likely to graze normally and are less likely to restrict grazing to areas with the thinnest application rates.

Adding compost to soil builds good soil structure and texture, increasing the amount of air that can infiltrate and the amount of water it can hold. Adding compost to heavy clay soil loosens the packed soil by opening up pore spaces that, like little tunnels, carry air and water down into the soil. Sandy soils, which tend to let water drain away too rapidly, are also improved with the addition of compost. The fine particles are united into larger ones that can hold a greater amount of water-100 pounds of compost can hold about 195 pounds of water! By increasing the soil’s moisture-holding capacity, compost also helps control erosion that would otherwise wash topsoil away.

When fresh manure is spread on a field, about 50 percent of the nitrogen is in a highly soluble form and will be washed out by rain when it is spread on a pasture. In compost, however, 95 to 97 percent of nitrogen has been converted to a much more stable form and will be slowly released, allowing plants to use it over a longer period of time. Compost doles out nutrients slowly when plants are small and at greater rates as soil temperatures warm up and the major growth period begins. (Soil microorganisms that release the nutrients from compost work harder as temperatures increase.) The benefits of adding compost will also last for more than one season. Composted manure releases about 50 percent of its nutrients in the first season and a decreasing percentage in the following years. This means that with constant additions of compost, the reserves of plant nutrients in the soil are being built up to the point where, for several seasons, little fertilizer of any kind may be needed.

Compost also supports essential soil bacteria; feeds earthworms and allows them to multiply; and gradually changes soil pH levels that are either too low (acidic) or too high (alkaline).

Because the composting process converts nitrogen into a less soluble form, it is less likely to be washed out of manure and into ground water and surface water. Excessive amounts of nitrate in drinking water can cause health problems such as blue baby syndrome and may be linked to cancer and birth defects. Recent samplings of wells in northern Whatcom County have found nitrate levels above the U.S. Environmental Protection Agency’s safe drinking water standards.

When rain falls on soil rich with compost, raindrops seep into it. When rain falls on packed soil rain runs off the surface, creating erosion and carrying soil particles to nearby waterways. Sediment can smother trout and salmon eggs and make water cloudy, making it more difficult for fish to find insects to eat. Raw manure also contains fecal coliform bacteria which is commonly used to measure contamination of water from human or animal waste. The coliform bacteria may not necessarily produce disease, but can indicate the presence of other bacteria that may cause infections, hepatitis, and other illnesses. When coliform bacteria is found in the water around shellfish growing areas, it often leads to shellfish bed closures. Composting kills most of these coliform bacteria as well as viruses and parasites that may be a concern to human health.

Using compost instead of chemical fertilizers can reduce our use of non-renewable resources like natural gas. Approximately two percent of the natural gas consumed in the United States goes into the manufacturing of nitrogen fertilizer.